Peter B. has been in touch with the latest on his small power hacksaw project:

‘The trial run being successful. 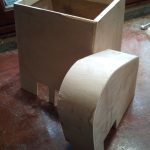 The motor box and case for the control panel was then fabricated from a mixture of 8mm and 2.5mm plywood.  Outline cut to clear the motor and the support frame, then the 2mm plywood was put into boiling water till pliable.  Quickly fastened and pinned to the two sides and left cramped in position whilst the glue set overnight. 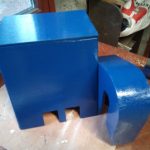 The next day the clamps where removed and the excess wood cut off, followed by a trial fit.  After some small alterations to the cut outs the housing was sanded down, and a first coat of primer applied.  This was then followed up by two top coats. 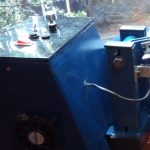 The control panel was then cut out and faced with an off cut of 2mm black plastic to house the switches and the speed potentiometer.  The panel was fitted with a 230 volt to 12 volt encapsulated transformer protected by its own fuse. 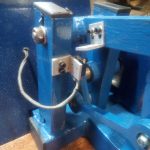 The output feeding an ex PC cooling fan via switch and also to a limit switch in series. with a relay which when the arm dropped cut off the supply to the motor.  The motor was fitted with an in line fuse which would blow if the blade jammed and the whole unit fed via a 13 amp plug, lead with a 3 amp fuse and an illuminated main stop rocker switch. 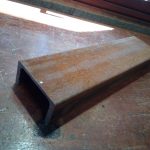 On the next trial, shortcomings in the vice became apparent. As I had made it from material to hand and it proved a bit too flimsy.

Luckily, an Engineering firm kindly donated me an offcut of 4 x 2 inch channel. 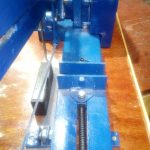 Which after being milled, drilled and the vice components moved over proved to be ideal, plus it gave the opportunity for holding larger material. 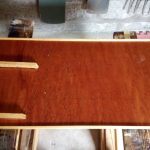 The opportunity was taken to make a better longer support board, which was varnished and fitted underneath with four anti vibration mounts. 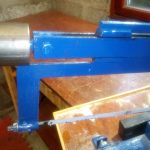 A Load weight was then fitted to the front arm to provide a bit more leverage when cutting.

The next stage was to fine tune the set-up, starting with alignment checks as it was not cutting absolutely vertical.

Part resolved by applying more blade tension.  Then adjusting the swing arm mount.  Followed by adjustment of the speed mostly by cutting various materials.  Otherwise, it works well and has been used a few times now.

Have yet to label the fuse holders and give values plus make a reference dial for the potentiometer and the swivel vise jaw. 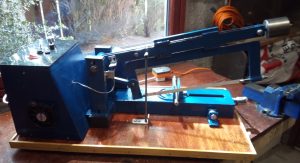