Almondell Wood has been planted as a coniferous plantation circa 1980, most trees being approximately 35 years old although there are some specimens of greater age (>50 years), possibly the remnants of an earlier plantation. 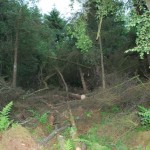 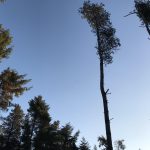 The wood does not appear to have undergone any forestry management and on purchase by ESME was thick with fallen and hanging trees. Because of this they have grown very close together and are tall (60-70 feet) and slender (up to 15ins diam.) with foliage starting 40-50ft from the ground. 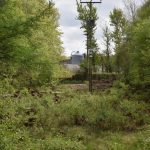 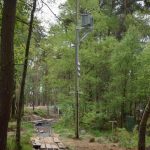 There is very little vegetation comprising the understorey except in small clearings. There are two power lines running across the site and by necessity provide open ground areas.

Flora.   In these clearings, honeysuckle, blackberry and ferns such as Dryopteris filix-mas and 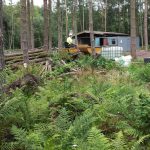 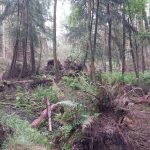 Dryopteris dilitata are common with the occasional appearance of Blechnum spicant. There are a few plants growing, for example, broad leaved and rosebay willow herb, violet, wood sorrel, ragwort, vetch, marsh thistle, wood rush and ground elder in amongst the trees.  Although a full survey of plants has not been carried out, the woodland has been searched for any unusual or protected species. None were found.

The majority of trees are the conifers larch and Scots pine, with occasional specimens of other species. The largest of these are silver fir, Douglas fir, Sitka spruce, and lodgepole pine, all present in small numbers probably representing a previous generation of planting. Of particular note is a short row of tall specimens of silver fir on the western perimeter forming part of a shelter belt. There are a few deciduous trees such as silver birch, elderberry and hawthorn within the woodland and quite a number around the perimeter. Oak, beech and ash can also be found on the woodland edge. These trees are relatively young and probably date from the establishment of the most recent plantation. 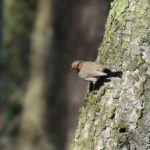 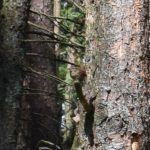 Birds.   There are a pair of buzzards which appear to be associated with the woodland as are various species of tits roaming the canopy. Robins, blackbirds, song thrush and jackdaws have also been seen together with a greater spotted woodpecker. There is evidence from numerous holes in dead trees that the woodpecker actively feeds in the wood and it is intended, where safe, to leave these trees in situ.

Bats.   There are no existing buildings in the woods and the majority of trees (BCT Category 3) have no potential to support bats. A few trees have been observed with cavities. Inspection of these has revealed no indications of bat roosts or hibernacula.  Bats have not been seen within the woods and a visual dusk survey of possible foraging paths on the wood perimeter (01/10/14) detected no bats flying.

Badgers.   A search of the wood has not revealed the presence of any badger setts and there is no other evidence of badger activity (e.g. badger paths, snuffle holes or latrine pits) in the immediate vicinity.

Newts.   Although there are drainage gullies and damp areas within the plantation there are currently no permanent ponds that could support a population of newts. 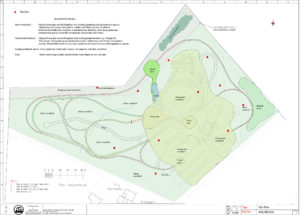 In its present state the wood has a relatively low floral and faunal diversity. The proposed development is not commercial; therefore, the level of activity is designed to balance our requirements with the silvicultural requirements:

On acquisition it was obvious the woodland had suffered wind damage throughout with many trees already fallen or leaning perilously into their neighbour.  The initial operations have focused on clearing these affected trees and opening up the woodland to give access for the various railway tracks and paths. 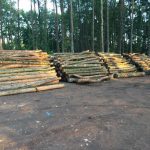 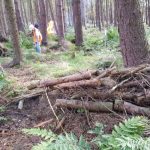 Felled timber where suitable has been sold for bio mass fuel.  Rotten trunks and smaller timber has been stacked to form ‘Eco Piles’ to encourage wildlife whilst large stumps have been placed strategically on the boundaries to form natural barriers to discourage unauthorised access.

The broadleaved fringes are will remain largely untouched to maintain a screen from the public roads.  In the far north western corner a triangle of land is to be left untouched. 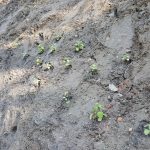 Planting to enhance the earthworks we have created includes Enchanters Nightshade planted one side of the cutting leading to the tunnel, Woodruff and some other woodland plants on the other side. We have planted wild garlic around the station area with Herb-Robert and wood avens (Geum urbanum).  The eastern approach to the tunnel has been seeded with Microclover with some success. 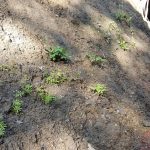 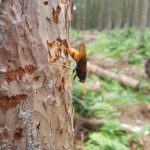 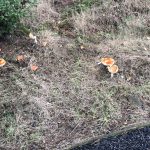 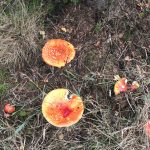 Autumn in the woods at Almondell can reveal some interesting and colourful toadstools.  These Fly Agaric (amanita muscaria) were seen under the Beech trees 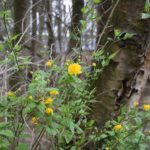 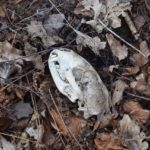 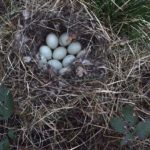 or this nest with a clutch of duck eggs.

If you know where to look, the woods are full of interest.

Almondell’s woodland has a large variety of insects to be seen (and felt on a hot summer’s day!).

The other morning hanging quietly minding it’s own business enjoying a late breakfast in the Rosebay Willowherb was……. 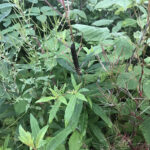 ….the caterpillar of the Elephant Hawk Moth.

It was surprisingly large, about 2″ in length.

The Butterfly Conservation website has more information about it.