Our Roving Reporter was well wrapped up against the chill December day to witness the farewell members steam up.  One thing was for sure, we could not have asked for better weather.  From dawn ’til dusk it was brilliant, bright Sunshine set against a beautiful cloudless blue sky with not a breath of wind to disperse the steam.  The light dusting of snow finished off the overall effect. 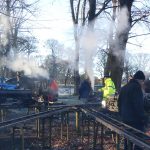 There was a good turn out of members, cars being parked all the way up the track and no one got stuck in the field!  Roddy’s arrival resolved the initial challenge of an apparent lack of water when he asked the simple question ‘Has anyone turned on the master stop valve?’  Obviously not.

With Findlay’s Cabin providing warmth from the roaring log fire plus gallons of fresh tea and coffee to wash down the cakes, mince pies and soup it was the ideal place for members to sit and yarn about the old days and speculate about the future.  Thanks go to Judith who kept the kettle filled and boiling hot. 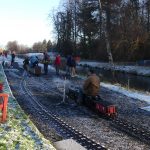 That hardy breed of drivers meanwhile were busy out on the track giving rides to the children who seemed oblivious to the cold.  Click for more photographs and click for a short video of the event 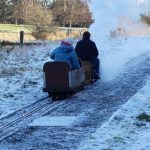 As the Sun started to slip behind the trees at about 13:30 and the cold began to bite locomotives, were taken back ‘on shed’ for the fires to be drawn leaving the last train to head out of the station up the long straight and over Blythe Bridge. 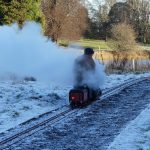 We watched as the red tail light finally disappeared.  And that was it.

Last Ever Steam Up at Newliston

Sunday, 14th January was such a fine day for the start of the demolition of Newliston that members not involved with the lifting would have one final steam up.  So whilst James was directing Dave and Peter in the correct labeling of the track panels the rest of us took the opportunity to have a run around. 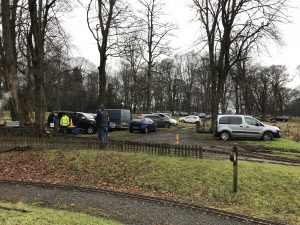 As can be seen from the photograph of the car park, word had got out and there was a good turn out of members paying their last respects.  Far from the mood being melancholy, spirits were high and an enjoyable time was had by all.

By mid afternoon the Sun had disappeared, the temperature had dropped and the rumour went around that snow was on the way which was the signal for most people to call it a day.

Richard however, was determined to be the last train ever and to get some night pictures.  With Roddy ‘encouraging’ Richard to be sharp about it, the big 5″ gauge South African locomotive made the last ever complete circuit before having its fire drawn and the boiler blown down. 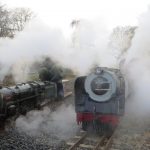 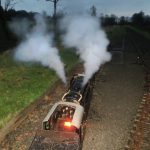 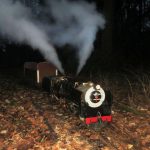 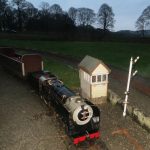 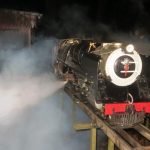