‘Live steam model engineering is my main hobby as I am fascinated by steam engines.  I inherited this interest in railways from my late father.  Prior to getting married I was seriously involved in full size railway preservation, but decided that this would not mix well with Mrs Bull in the longer term & thus ‘downsized’.  All that said, my other interest is restoring model boats & during the lock down I have completed an unusual project for a lady in South London which I thought might be of interest. 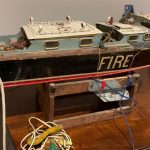 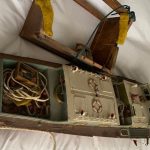 This is what arrived, a rather sad & neglected AeroKits Crash Tender, but underneath was a lovely model crying out ‘save me, save me please’. 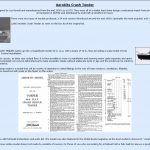 The background to the kit was interesting & it could be made into quite a detailed model.  The builder of this had added a water pump to spray water from two nozzles mounted on the roofs of the engine room & mid section.

Part of the models problems was the O/S Marine GloPlug motor recommended as the power plant.  The fuel contained Castor Oil as the lubricant & over the years the spillages had soaked into the ply of the hull causing it to de-laminate & remain ‘sticky’.  This had to be dealt with. 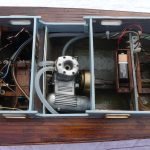 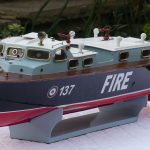 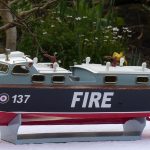 The owner wanted the model restored as a static exhibit, which was good news as the O/S Motor was missing the GloPlug & did not want to turn over freely at all.  The carburetor was firmly seized too & I could not free it up at all.

On a job like this one has to remember that the objective is to restore it as the original builder made it, not to be tempted to rebuild it as I would like it.

One interesting ‘find’ were the batteries.  When her father had laid the model up, he had not removed them.  Although this meant the original battery holders were way past any form of redemption, the remains of the labels were a real trip down memory lane and helped to date when it was likely last on the water.

The project was completed & the model safely returned to the owner by ParcelForce.

Meanwhile, it is back to model engineering & an ‘O’ gauge live steam ‘Royal Scot’ to get running.