South of Edinburgh progress is being made on the repair of the ‘Maxi Lucky 7’ which, as Charlie reported earlier, is a tad under the weather.  However, surgery is going well & the patient is making slow, but steady progress:

‘Here is a wee update on my (slow) progress with the Maxi Lucky 7 axlebox: 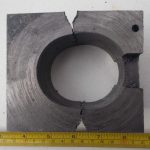 I chain drilled the two sides of the box and split it with a chisel.

The axle is about 55mm Ø, and the hole in the box has worn pear-shaped, with about 10mm elongation. 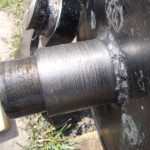 The surface of the axle was badly scored.  The loco has obviously been running like this for some time.  My guess is the compensated suspension has helped to keep it on the rails. 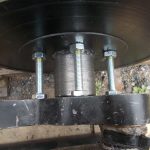 The Flycrank was removed by jacking it off with some nuts and bolts, and latterly some spacers. 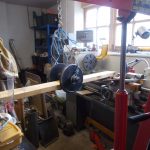 To get the wheelset into my Chester Crusader, I used the Engine Crane and a plank.  Even in that condition it still weighs about 90lbs and there was no way I could lift it into place on the centres without damage to myself, or the lathe! 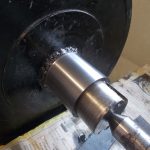 Eventually I removed about 1mm from the diameter and got a reasonable finish.

Once the new box is completed, I need to re-fit the Flycrank (Loctite, and half and half grub screws I think) and re-assemble the loco.

By the way, Hantsrail has put some new video on their Youtube channel:

This shows some runs along the figure-of-eight, after completing a temporary connection about three weeks ago. These are the first runs right round after about 20 years work, on and off.