Well, if that hasn’t grabbed your attention…..!  When Dave S’s email dropped into the News Desk inbox with the same title, I was intrigued.  I knew that the bell was being refurbished, I know that Dave has capacity in his workshop for large engineering, but this?  Surely not….

‘The dome for ‘Dholphur’ which I had ordered in the middle of March finally arrived by Courier.  I have to confess I had not paid any attention to the size of dome in the plans, so was surprised at the size when the casting had been unpacked.  It’s dimensions are approximately 5.5″ tall x 4.375″ diameter. 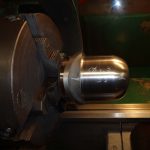 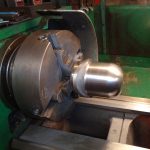 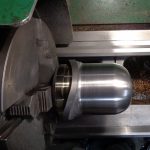 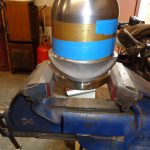 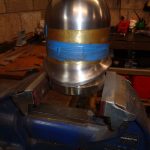 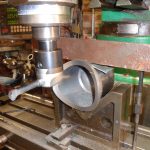 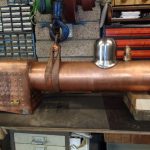 The basic machining is pretty straight forward, it is the hand fettling which takes all the time.  Oh, and sore fingers from polishing!

There is a good story behind its arrival.  Kennions did not  have it in stock, so they had to order from their usual foundry, which they do every fortnight.  Then sometime later I received an update from Kennions to say the foundry was having problems securing fuel for furnaces.  Another foundry that they used to deal with was contacted and an order placed.  This involved making a 160 mile round trip to deliver the pattern to foundry.  I thought that that they had certainly gone that extra mile for the customer and sent my thanks for that!
Further updates in due course.  Stay sane everyone, yours Dave S.’
We use cookies on our website to give you the most relevant experience by remembering your preferences and repeat visits. By clicking “Accept”, you consent to the use of ALL the cookies.
Cookie settingsACCEPTREJECT
Read More
Privacy & Cookies Policy