Chris M. has submitted a few photographs showing the progress with the Domes.  This locomotive has two of them!

‘It was decided to make the dome casing and sand box from sheet brass rather than castings.  The full size originals are sheet fabrications and in many cases the sand box in particular, looks a bit ‘rough’ in its forming.  Also, of note is that the radius where the vertical sides meet the saddle portion, even in full size was very tight, and therefore my fabricated assembly would still look fairly close and correct to the original. 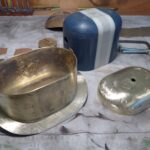 As both the dome casing and sand box were the same width and the same radius, I was able to make a configurable former that could be used on both.  A 4” Delrin dome casing former was made in two vertical halves and by adding in three flat plates in the middle would form the sand box shape.

Each item was made from three sheets.  A vertical plate, a saddle and a top cover.  All were formed by annealing and bending, but the radiused top portions were a slog. 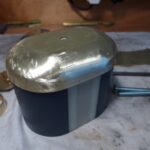 To form 2mm thick brass to the required radii took well in excess of 50 heating sessions.  It was a routine of cook it, cool it, bash it, and repeat over and over again.  There comes a point when it’s about a third of the way over the former when each heating produces so little progress it’s easy to believe it will never close onto the former, but it does….. eventually. 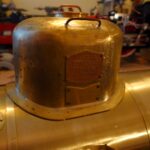 At the end of the day, I’m really quite pleased with how they turned out and they definitely look better than castings.’