In January 2022 Maurice wrote about his compact steam plant & included the line ‘May be able to power a 5″ driving trolley at up to 5mph’.

Well, he has built the driving trolley & it does!  Here is Maurice’s story:

‘The underlying idea was to end up with a compact lightweight 5” gauge “locomotive” where the driver provided most of the adhesive weight.

Ideas for driving the wheels included:

Plan A – Simply putting the wheels on the existing shaft

Plan B – Chain drive (already have a suitable chain and sprockets).

The design issues highlighted the fact that I’m not a trained draftsman.  MS Word was used to date, mostly for small parts like boiler fittings.  Definitely not 3-D and hard work for e.g. adding dimensions.

Ended up using Solid Edge 3-D design software.  Chose Solid Edge because the Community Version is free and provides comprehensive facilities.  Limitation is apparently that you can’t open the resulting design files with the Commercial Version.

Reasonable tutorials can be found on YouTube with a little trial and error  (Some only have a commentary in Hindi/Urdu!).

End result was I now use Solid Edge for designing even simple parts – I especially like the comparative ease of producing dimensioned 2-D drawings from the 3-D design.

Design showed that Plan A above would work if the driving wheels were large enough. 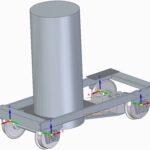 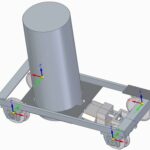 Note that the engine pivots up and down with the axle  (c.f. a motor scooter).

Used aluminium angle and bar for the chassis to keep the weight down.  Considerations when using aluminium include:

The driving wheels are 65mm diameter and the reduction gearing is 2.5:1.  Thus at 5 mph the engine would be running at 1642 rpm. 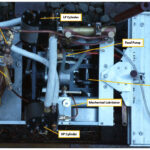 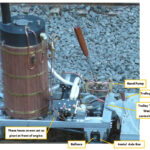 Comments about the resulting loco: 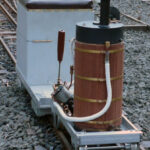 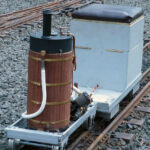 I guess it would be able to cope with higher gearing, but I’m happy with it at the moment.  It may feel like it’s going fast, but it may well only be doing 5 mph.  I intend to get an electronic rev. counter to work out the actual speed as basic ones are certainly cheap enough. 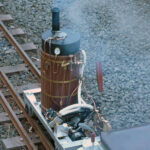 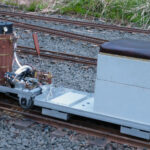 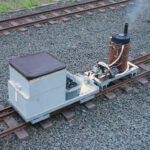