Sunday, 10th November was Remembrance Sunday and Robert had organised a wee event “to commemorate the contribution of British and Commonwealth military and civilian servicemen and women in the two World Wars and later conflicts”.  Having a miniature railway at Almondell it was felt appropriate to focus on the contribution made by the Railway Operating Department (ROD), both the locomotives & the people.   Chris brought along a suitable cross & Robert set out a display of poppies. 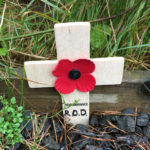 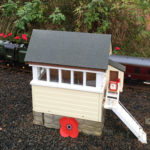 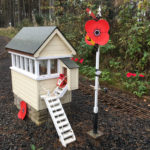 At 10:50 the locomotives were moved into position ready for the two minute silence. 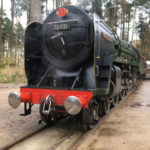 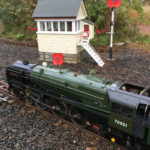 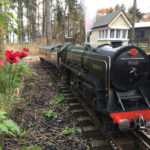 At 11:00 ‘Morning Star’ blew her whistle to mark the start of the two minute silence.

At the the conclusion ‘Morning Star’ blew her whistle again & trains recommenced running. 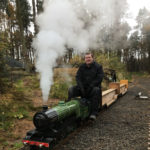 Paul with ‘Bantam Cock’ was doing the honours with the passenger train on the Comrie / Almondell Loop.

Next year Robert hopes to have his 7¼” model of ‘Maude’ on the track and for those of you in the know, ‘Maude’ was one of the locomotives lent by the North British Railway for service in WW1.  ‘Maude’ survives today at Bo’ness.  See the progress with Robert’s locomotive.

It is planned to make this an annual club event.