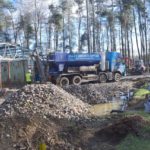 A delivery of Volumetric concrete was arranged and with the weather being reasonable all was set for a productive day.  As ever our Roving Reporter was on site to record the proceedings……

The first job was to cast the abutments for the Five Sisters Crossing. As has been mentioned before this is the biggest civil project required to complete the Newliston (5 / 3½) and Almondell (7¼ / 5) (or circuits A & B if you prefer).  This is the structure upon which both circuits cross the pond and its completion is a priority. 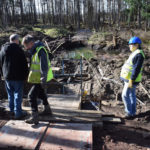 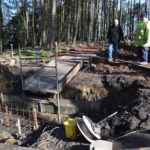 Once the water had been pumped out of the shuttered area and the ‘gaffer’ had inspected the chute constructed to place the concrete in the hole and given the go ahead, work commenced. 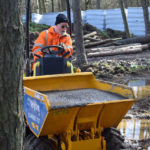 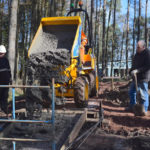 Cautiously the first load of concrete was taken to the unloading point.

Final positioning and then bullseye!  Tipped in the right place and then gravity did the rest. 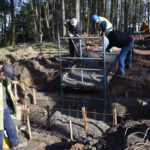 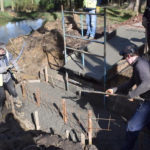 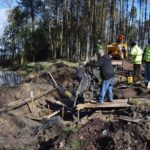 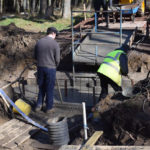 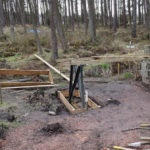 A little back from the Five Sisters Crossing the approach viaduct for the Newliston (5 / 3½ circuit A) is making steady progress.  Steel work has been assembled by Paul & John for the first support.  Only another few to go chaps!

Meanwhile some ‘wag’ hollered out ‘Look, the Mallard’.  With great anticipation all eyes turned to the mainline expecting to see 4468 go blasting past…… 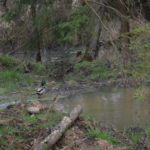 Yeah, we thought it very funny too. 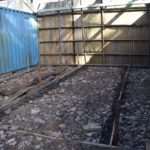 The pouring of the first slab for the workshop floor was the next task on the list. 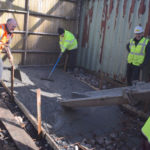 Not as far to take the mix, but still required a lot of effort. 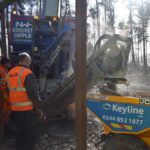 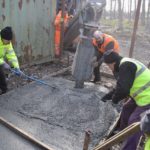 Getting it level was important too. 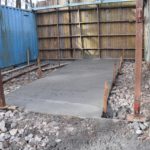 But then it was all finished.  The remaining two slabs are for another weekend.  Casting in three slabs will allow for movement and avoid cracking. 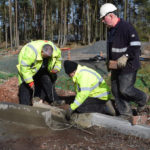 The final job of the day with the surplus from the mix was to set the flags for the kerb. 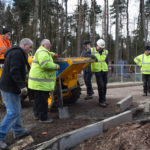 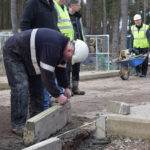 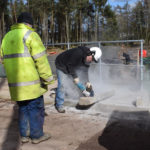 Soon have it sorted…… 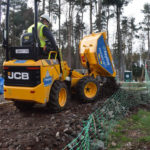 All sorted, just adding some Blaes to bring up the level.  A job well done,  just the…. 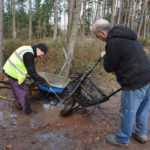 cleaning up and tidying away to finish off the day.

Visit ESME Twitter for more photographs and a short video.

As ever, click on the pictures to enlarge and start the slide show