Peter has been seen recently scampering around the track on a little blue ‘Firecracker’ which goes under the official title of a Scamp Mk4 (Lister Autotruck style).  Our Roving Reporter managed to collar him long enough to get the story behind the build.  Here in Peter’s own words is the background:

Why did I decide to build a Scamp?  Well, I had experienced the power of the one on site and how well this piece of kit managed to transport trucks and material round the site at Almondell.  I wanted one that I could use anytime I liked and have a bit of fun with at the same time, making work on the site more enjoyable.

So I contacted Chris Dixon at CMD https://www.miniature-trains.co.uk/ and along with another member, purchased two kits. 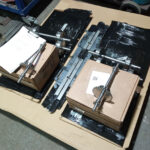 They arrived in a big package which had to be split into two lots, but they were well identified as Scamp 116 and Scamp 117.  I chose to go for 116.  All the components were stripped of their packaging and cleaned, removing any grime collected in the process. 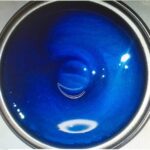 An undercoat of acid etch was then applied to prevent rusting.  As regards colour, I had seen a blue called ‘Firecracker Blue’ 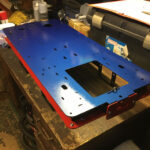 which I was originally going to paint my Sweet William but changed my mind in favour of the Scamp.  As I already had it in stock I started with the foot plate.  The red was left over from the Polly V. 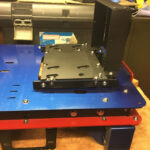 The build continued with the framework for the engine and dynamo. 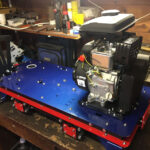 The electronics were installed by a fellow member with much more expertise than I and completed after two or three morning visits culminating in home made soup and sourdough. 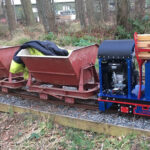 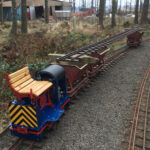 And here Pickle is seen earning her keep.

This was an easy build and helped me through a difficult time with my wife’s ailing health.  The concept and design were created by Colin Edmondson 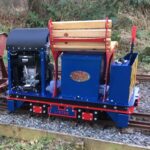 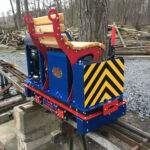 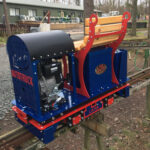 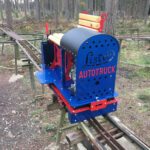