More used to seeing Peter behind the regulator of one of his two steam locomotives he recently branched out into IC propulsion.

Peter has been impressed with the club’s ‘Scamp’ & it’s ability to shift heavy loads.  As a consequence he decided to build one of his own & a ‘reet’ neat job he has made of it too. 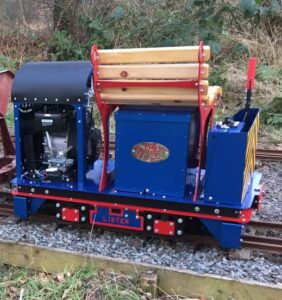 Resplendent in a blue & red livery it is seen on the track.

Peter will be using it to move the ballast wagons around the site over the coming months.

In the coming weeks it is hoped to persuade Peter to write an article on its construction.