ESME has shown itself very capable of recycling all sorts of materials.  Andrew has excelled at this, as over the last few months he has been working mainly in solitary repurposing 300 million year old Sandstone to form the portals to the Wallace Bridge.  Andrew recounts the story behind the headline:

‘Let’s start with a question: 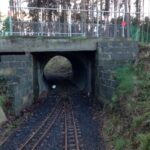 How do you turn this 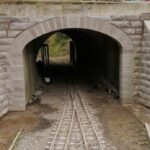 When ESME purchase the woods at Almondell in 2013, there was an urgent priority to make an access road into the centre of the site.  This required the hurried construction of a strong bridge, formed by placing a corrugated steel pipe in a groove in the ground and surrounding it with aggregates and concrete.

We took a “constructional design” approach and whilst it made a strong bridge, we also ended up with the proverbial camel and our bridge was full of quirky angles and bumps!

As time went by, some attempts to enhance the appearance were started but the sheer scale of the task had not been appreciated and nothing was completed.

When I was asked to take on the task, I had a clear picture in my mind’s eye of what I wanted to achieve but we had little money to work with. 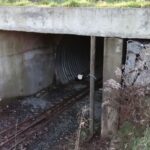 The first thing we had to do was to strip away the concrete block construction so that we had 2 flat surfaces to work with.

There were numerous difficulties to deal with; the curved track was not central in the pipe, the clearances on the sides were limited and unequal, the overhead concrete beam presented a height restriction and the angles of many surfaces were not vertical, perpendicular or level! 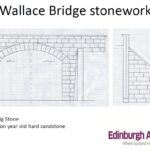 From the start I was keen to build a 3 centred arch design in keeping with many historic railways bridges, although I also looked at a more simple and modern single arc design. 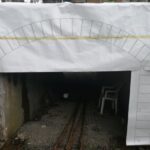 I even drew out designs in full size and put them up to see how they would look.

With the constraints of the concrete beams and the clearances required, the design need to be accurately drawn to match the space and construction need to be within a few millimetres of the drawings. Considerable time was spent at the beginning of the project establishing the correct data points, arcs and angles required.  I had to employ my son’s 4th year trigonometry knowledge as well as many hours studying the design of masonry arches.

The next issue was the building materials.  Thanks to Peter Arnold’s funding efforts, the Edinburgh Airport community fund had given us a small fund to work with however this was only a quarter of what we need to “face” the bridge in real stone so we looked at various artificial, constituted stone and decorative concrete block options.  However, none of them had the right look and workability to achieve the desired appearance and eventually I turned back to the real stone options and looked for a way to bring the cost down.

The breakthrough came when I met Alan McLeish of Tradstocks near Stirling. Alan was the sales estimator for Dunaverig Quarry and not only is he a highly skilled stonemason, but he also had an interest in model making in his younger days and he lives close to Almondell. 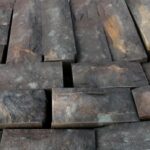 He showed me a sample of Dunaverig stone, a 300 million-year-old sandstone that had just the right colour, texture and workability that I was looking for.  However the price was still out of our league until Alan informed me that a lot of the cost was related to the cutting of the stone and if we bought the basic stone blocks, then he would volunteer at Almondell when he had spare time, and cut and shape the stone for us, thus reducing the cost to just within our budget.  Well done that man! 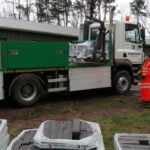 The order for the stone was placed in October 2019 and the building on the support walls began. The stone arrived in late March and then it all stopped!  Covid 19 struck and we went into lockdown.  Six weeks later and slowly we were allowed out.  I was now on furlough from my normal job in the corporate travel industry and the weather was lovely, so as a “maintenance” worker I went out early in the morning and put in some long shifts, working on my own in totally Covid free conditions, to progress the wing walls.  When Almondell began to open up more formally, I was joined by Sandy, Bob and various others.  We socially distanced by working at opposite ends of the bridge and opposite sides of the track.

The guys will know how strict I was in maintaining the accuracy of the building lines.  Even to the extent of knocking down 3 feet in height on a wall which had veered in to a 2cm undercut of the plumline. 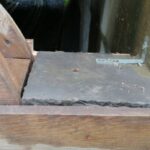 Strength in construction was introduced in various ways. 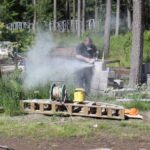 Meanwhile, Alan kept up with us, suppyling precisely cut and tooled blocks for the side pillars.  He works to a 2mm tolerance! 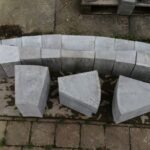 Each voussoir (arch block) has a notch cut out of the back to fit around the concrete beam. 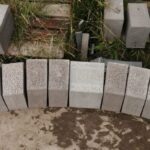 As my masonry skills increased, I took over the stugging and droving of the pillar blocks and voussoirs. 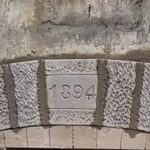 I even hand carved a date on the keystone.

The proudest moment for me was when I removed the wooden form work and the arch held itself up with absolutely no movement.  Now I need to complete the surrounding stonework and cap it off with the coping stones and then on to the other end. 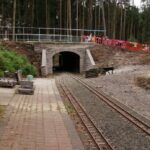 It has been a big job but I have enjoyed it and it just goes to show that the British tax payer’s money was not wasted by putting me on furlough for 6 months!’

We would all agree that this has been an amazing project & has enhanced the appearance of the bridge tremendously.  An important point too is that Andrew has learnt new skills, which is all part of our ethos for education.

Something that Andrew hasn’t mentioned is the West end has a different design, but I am sure that will be the subject of a future article, eh Andrew?!

How about tackling the tunnel portals next now that you have learnt these skills??