The news on the BBC the Friday morning, 28th August was full of the flooding at Broxburn yesterday afternoon.  Broxburn is two minutes from our Almondell site.  James was still on site & sent the newsdesk this report…….

‘I was washing the digger and tractor (!!) with Andy when it became really heavy around 5 pm.  There was water lying and flowing everywhere with mud washing down from the new picnic area onto the track at the end of the station.  The field water rose 5″ before I left so I put concrete blocks on the bridge sleepers to give them some chance of not floating away. 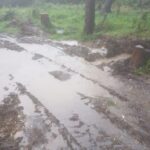 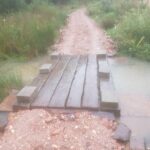 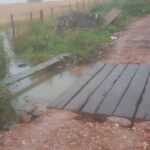 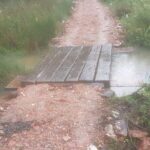 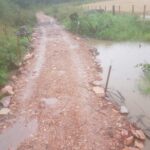 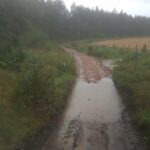 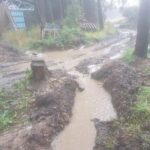 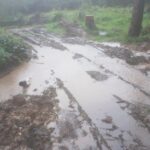 When I left around 6.15 roads were flooded so I couldn’t get under the railway bridge safely.  I turned and had to pass through deep water to get to Uphall station.  I then found the A89 shut by an accident and had to turn back through Broxburn only to find bad flooding there too.  I just had to go through it.  I then passed 7 emergency vehicles between there and Newbridge.  I managed to get through the road up to Ratho by driving half on the pavement at flooded low points and at Ratho the water was coming out of a manhole cover just before the canal bridge.  I finally got home very wet at about 7 pm and was relieved to find the house OK.

Quite a hard day but 4 of us stayed on to shift blaes down in heavy steady rain until 4.45 pm.’

The apparent ‘soft focus’ look to the pictures is due to the volume of rain cascading past the lens!