Andrew N. dropped an email to the Newsdesk informing us why the car park at Almondell suddenly had pallets of used mono-blocks….. 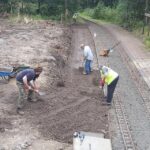 ‘The origin of this story was that James said the committee had decided to lay a second platform with mono blocks to match the other one.  We won’t mention the false start with the concrete slabs! I had previously seen a person advertising on Gumtree, a driveway that was available to anyone that would lift the paving.  The listing had gone but whilst searching again, I came across a gentleman in Minto Street that was offering his driveway for free.  I went round to see him and the blocks were a good match to the ones that were already laid at our station.  The donor had been to Strathaven so he identified with our purpose and was happy for us to take the blocks. 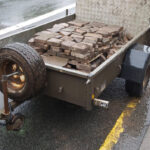 The location was a busy main road in central Edinburgh but I identified that a Sunday was really the only day that we could do this as it was the only day with no parking restrictions.  There was a bit of a Dunkirk spirit, and people came forward with offers to help.  The day started out fine and dry. I turned up at 0900 to make some preparations for the 1000 start but within a short time I was joined by some others and then the first trailer at 0920 and was loaded and away in about 15 minutes.  The next 2 hours were a blur as people piled in, loading the blocks on to the 6 trailers, a transit van and 2 people filled their car boots.  At the height of activity we had about 15 people loading trailers so fast that I had to slow them down so that we could count the blocks and calculate the loads. 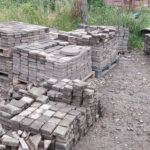 Working out 7 x 9 x 3 plus a few down the side, whilst eager helpers kept piling them in was a bit tricky.  It would have been easy to overload the vehicles.  As the loads went away the weather started to threaten and eventually turned to rain whilst we waited for 3 trailers to return for the last of the load.  It is probably just as well we stopped as some members were eyeing up the neighbours drive!

We shifted over 7 tonnes and it was a great effort by everyone.
Thanks to Richard, Alistair and Euan Robertson, David N, Bob, Geoff, Ruairdh, Steve R, Steve L, Alistair Wright, Phil, Roddy, Daniel, John, James R and Paul K and special thanks to those that made double runs with their trailers.’
We use cookies on our website to give you the most relevant experience by remembering your preferences and repeat visits. By clicking “Accept”, you consent to the use of ALL the cookies.
Cookie settingsACCEPTREJECT
Read More
Privacy & Cookies Policy