The weather forecast for the 2nd January got worse as the day drew nearer and sure enough, on the day it rained heavily from mid morning.  As a consequence only a few hardy individuals braved the wet & the mud around the temporary unloading facilities to run a locomotive.  The locomotives came from the extensive stable of South African Motive power owned by the ‘Adventurescot’ Richard.

One of the locomotives was 3½” gauge & this took the accolade of the first one in this gauge to traverse the newly completed Newliston circuit. 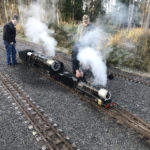 Little & not so little

In Richard’s own words: “The 3½” track was amazing and my wee (that’s a relative wee, by the way!) loco just loved it.  Points and all there was not a single problem.  Even the big 5″ went great and had no problems at all.  I was well impressed.  I love the track after the bridges.  The climb up to the level crossing really makes that small loco bark.  I just wish the camera had picked up the sound better.”

What more of an incentive do those members with 5″ / 3½” gauge locomotives need to bring them along and stretch their legs on the Newliston circuit?  See you at Almondell!