This story is an example of the old adage ‘every cloud has a silver lining’, albeit a rather expensive one!  My old Boxford model ‘A’ lathe was obtained second hand from a school and whilst at the school someone had tried to put it into back gear whilst still running.  This resulted in the loss of a couple of teeth which meant that it was noisy in back gear.  Over many years of use the noise got steadily louder until it reached the point where I felt I should do something about it.  A lathe dealer I had dealt with over the years advertised the repair of these gears, I decided to dismantle the headstock and get it fixed.

Purchasing his comprehensive Boxford manual made the dismantling straight forward and the parts duly dispatched.  Many excuses and 15 weeks later, no repaired parts.  The final straw was his phone just ringing out.  Consternation, the Boxford was now reduced to having only 8 speeds instead of 16.  Not a show, stopper, but annoying none the less.  It then occurred to me, why not fix a variable speed drive?  An internet search revealed a company called Newton Tesla who made just such a unit and to clinch the sale, it was designed to fit the Boxford or Myford.  I decided to purchase the ready wired package. 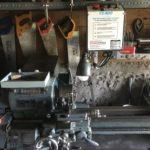 Here it is back in action, the control box above the lathe. 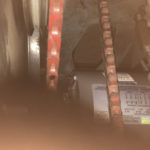 The new motor tucked away on the old mounting replacing…. 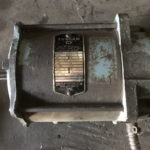 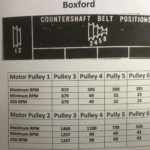 The speed ranges obtained from the different pulleys.  In reality I have it set on 2 / 4 and with the variable speed covers all I want.

The most impressive part was it took 2 hours to unpack the parcel, fix everything in place & start turning again.  The lathe is so quiet, I can listen to the radio at normal volume whilst running the lathe!

I was so impressed that I spoke to them about converting my old early 1900 (originally treadle operated) Pittler lathe that I inherited from my late father.  This was always very hit & miss regarding speed and I felt that the same system would significantly improve it. 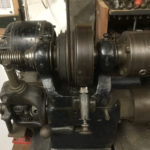 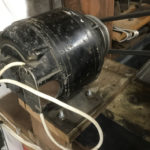 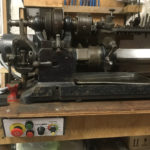 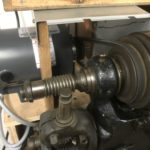 Again, the new performance is impressive and it took just 2 hours to unpack and get operating.

Whilst at it, the opportunity was taken to fit belt & swarfe guards to both lathes to protect the new motors from the ingress of fine bits of metal.  These utilised the metal cases from old micro-waves. 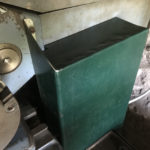 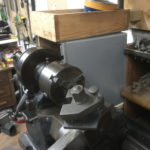 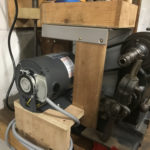 If you are thinking of updating your lathe, I would recommend it.