Maurice P. has an interesting model on the stocks.  Maurice has kindly written up some notes about the background to the model which, together with some photographs he has sent in to the Newsdesk.  Earlier last year Maurice visited Almondell with his other locomotive for its steam test.  This too is a variation on an LBSC design. 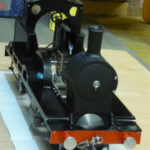 ‘The loco is based on LBSC’ s Jeanie Deans. 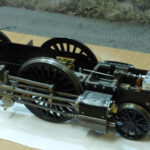 It’s mostly scratch built with the wheels being the only castings used so far.

Main deviations from LBSC’s design are: 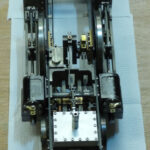 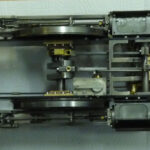 It’s bedded in well running on compressed air but might get scored like hell on steam – we’ll see! 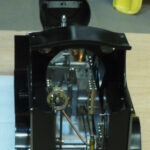 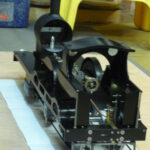 Decided to use metric stainless Allen and Torx screws to hold it together.  M2 is the smallest size used.

Experience with e.g. the inside Stephenson valve gear on Petrolea has left me with a temporary aversion to extremely small nuts and bolts especially  in confined spaces.

Hope you are keeping well.  All the best, Maurice’