Paul H. has contacted the NewsDesk to say that although he has not been able to help at Almondell since a certain virus became prevalent, he has still been busy building a model railway, albeit a slightly smaller one.  This is Paul’s story:

‘Back in 2017 when I was reminded of my mortality, I decided my next model railway would be the culmination of a lifetime of model railway building.

My most enjoyable 00 gauge model railway was in my garden when I lived back at Southend-on-Sea in Essex, so I’d set out to recreate aspects of that in my garden in Scotland.

A bit of history

Earlier attempts at 00 gauge in my garden in Scotland had lasted about 5 years in the Scottish climate. It started 2007 with some old plywood. It was built cheaply to merge in with the vegetation. 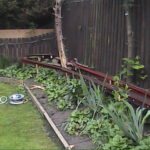 A simple figure of 8 over the 40 feet width of the garden. 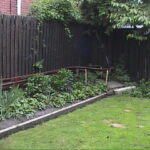 This worked well, with very soft gradients it allowed 10 coach trains to run at realistic speeds but little else.

I could plug anything into any controller into that early incarnation, so could give my 00 gauge Hornby Live Steam locomotives a really good run.

This video taken on the opening day shows a couple of examples of full length trains running:

And so it grew to include a terminus at the right hand side of the garden, allowing me to run an out-and-back operation. I included some storage sidings and headshunts within the constraints of space, but this introduced points into the open Scottish climate.  Points can become a little unreliable over time. 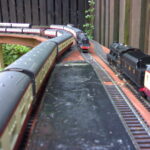 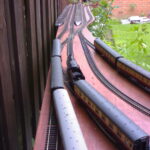 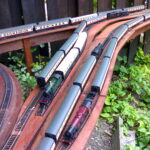 The electrical side became more complex too.  To allow conflicting movements I needed to be able to isolate parts of the track. 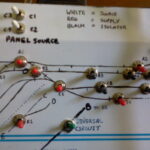 This is a photo of the control panel for that terminus station.  The junction formed a triangle, so one of the (outbound) tracks needed to have reversible polarity.  Trains would stop once they were clear of the station, the polarity reversed and the controller direction switched to then proceed out onto the main circuit.

That early garden railway was taken up in 2012 when the plywood started to delaminate.  However, the points had mostly survived enough to be re-used and the track went on to be re-used on my indoor railway (in a bedroom).

So in 2017 I decided it was time to go back into the garden with my model railway.  The bedroom was simply too constraining and there was nowhere else suitable inside the house. 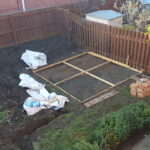 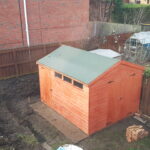 This time I’m starting with an inside, dry, insulated shed as a base to work from. The area was marked, cleared and a concrete based built.

Then one cold December day, up went the shed…

After a lot of internal boarding and wiring, insulation and baseboard construction I finally had my foundation for my ultimate model railway project. 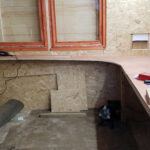 The picture shows the shed in 2018 with the lowest level baseboard in place and the hole cut out at the back of the shed, which will, one day, allow the 00 gauge layout to break free into the garden.

On the lowest level we have a 00 gauge circuit of varying heights, allowing two 00 gauge trains to be run independently around the inside of the shed.

Moving up to chest height we have an N gauge model railway that will run around the inside of the shed only.

Then, just to complete the set, above the N gauge level, roughly at shoulder height is an 0 gauge model railway. This is something I’ve never build myself before, but having accumulated a few pieces of rolling stock I’m keen to have a basic layout to play with, which is actually about all I’ll get inside an 10’ x 12’ shed anyway.

So it was at this point that work inside the shed slowed considerably as work on the garden outside took priority, but back to 2020 and Covid happened.

With nowhere to go all of a sudden, I needed something to occupy my mind away from computers and screens (which is my work). The physical challenges of building a model railway were just what I needed and the garden externally was fairly advanced. So it was back inside the shed that I went…

Further updates will follow, meanwhile stay safe everyone & hope to see you sometime in 2021!  Paul H.’