The website editor has been busy too with a different project….

‘In 2014 I was asked to restore a number of wooden toys that had been props in the 1985 film ‘Santa Claus – the movie’ starring the late Dudley Moore.  The film is a regular on television every Christmas.  One of the toys was a rather nice Bi-plane which was loosely based on a WW1 single seat fighter such as the Sopwith Camel. 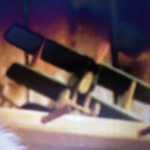 This is a ‘screen grab’ of the prop sitting on a shelf of toys ready for Santa to distribute to all the good children on….. well, you know how it goes! 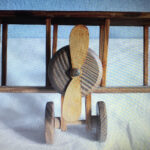 This was how I received this prop.  Time had faded its colours although it was in excellent condition structurally. 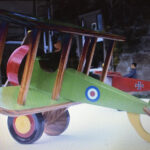 This is the model after some tlc.  In the background is a single seat Fokker monoplane from the same movie which I restored too.

At the time I thought these models would be worth making constructional drawings as I had an idea that some time in the future it might be something I could make for a grandchild.  Well, that time was now!  Our grandson Innis is approaching his second birthday, is keen on aeroplanes & I thought this better than the Duplo one. 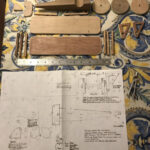 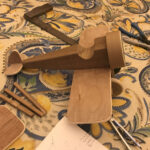 So it was out with the drawing, a rummage in the shed for some suitable wood & four evenings in the workshop soon had all the bits made.

By the way, I must have Womble genes in me somewhere.  The fuselage is from a piece of Teak from the scrapped RMS Armadale Castle (scrapped 1936), the engine nacelle & wheels are from the discs of ply cut out of the building for the roof ventilation ( just knew they would come in handy!). 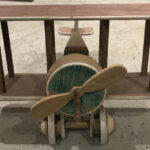 Here we are ready for painting.  The prop was cut free hand & is perfectly well balanced when spun. 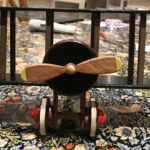 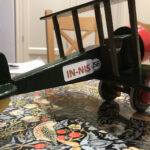 And all finished.  I used Innis’ name for the registration mark.