‘Trails & tribulations at the Bathgate locomotive works this last week!

The first challenge was the petticoat pipe.

The first job was to turn out the die for the shaped end, followed by the blank for the parallel end. 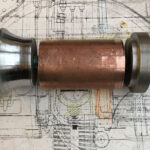 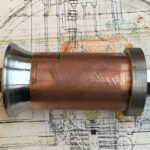 By placing a threaded bolt down the centre then by tightening the bolt it should force the tapered end up into the pipe & form the curve. 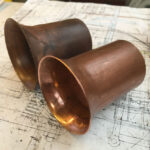 Two attempts were required to form the smooth curve as the first learning point was not to anneal the copper tube!  This made it too soft & the parallel part buckled under the strain of forming it. 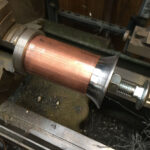 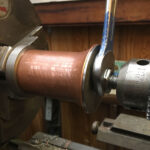 All set up & ready to go with the second attempt. Quite a lot of torque was required on the spanner. 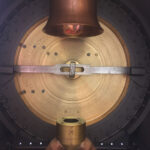 All finished & in place.  The lighting makes it look a little surreal.