Daniel has been busy in the workshop, a mixture of ‘Round Tuit’ work, progressing his current projects & starting a new one!

My ‘Round Tuit’ job was based on the decision that I had become tired of having to retrieve things from behind the lathe. 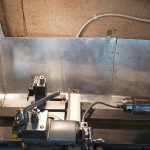 As I didn’t want to pay the few hundred pounds for a rear splash guard, I have made one out of some aluminium plate I had.  All pop riveted together. 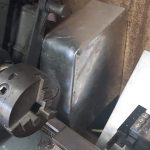 It acts as a motor cover too, so stops any swarf and oil getting to it.  It won’t win any awards, but it works well.  The rear side of the motor cover has a good few layers of paint so there is no chance of any electrical continuity. 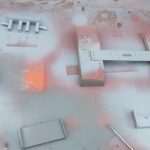 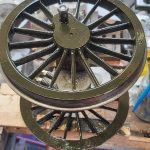 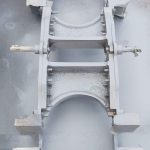 I have stripped down the Glen for painting .  So far the wheels are almost done but the rest of it is still in primer taking my time with this part. 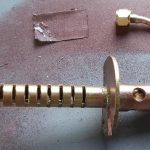 Progress with the 16mm ‘Dacre’ has been to make a gas burner.  This was the 2nd attempt.  My first attempt was done using junior hacksaw to cut the slots & it did not work at all.  So I chucked it in the lathe, cut off the slotted part, bored a new hole & inserted a new tube.  This time I mounted it vertically in the mill and used a slitting saw to get the exact spacing and straight lines that are all the same width.  This time it works.  I await material turning up to make some more parts.

My other project is the 5″ B1 ‘Springbok’ which I decided to add to the list (!) whilst I am waiting for items to arrive to progress both the Glen and the 16mm loco.  I have done some work on the B1 parts….. 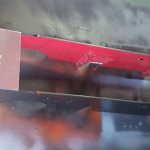 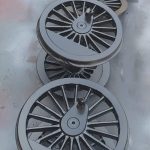 … some painting on the frames & wheels….. 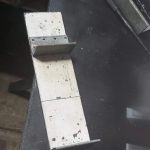 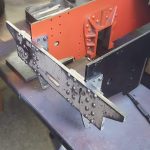 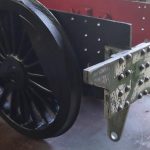 …. making the rear dragbeam for it.

Yes, the Martin Evans drawings can be a bit frustrating at times with a lack of dimensions.  For instance I had to figure out the placement of the rivets as there were no dimensions for this, only the size of rivets to be used.  This actually took longer than the riveting.  32 snap rivets – at least I’ve had plenty practice now!

The Martin Evan’s design is a touch too wide by three quarters of an inch it is possible without too much difficulty to reduce this excess to a quarter of an inch.