Bathgate Locomotive Works has been suffering ‘downtime’ recently due to the adverse weather conditions reducing the temperature inside the works below the legal limit for the workforce.  However, time has not been wasted as it has allowed the works manager time to draw up the plans for the next phase of the work.

There have been a couple of times when the temperature did improve sufficiently to allow limited work to take place & Robert has submitted some photos of progress: 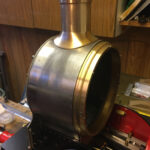 ‘One job that got finished was the machining of the back ring for the boiler / smokebox interface.  It was a little disturbing to hear the lathe labouring on initial start up due to the cold temperature of the lubricationg oil, but once the bearings had warmed up swift progress was made. 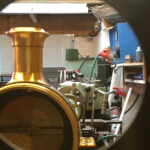 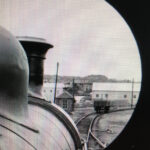 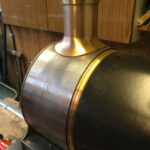 A comparison view through the cab spectacle & one showing a suitable plastic tube to represent the barrel! 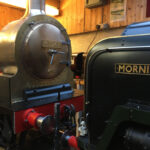 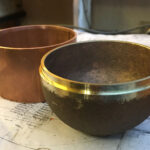 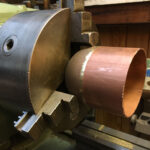 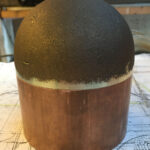 Next up, constructing the dome.  The casting is for a larger boiler, which meant the end had to be cut off.  Then, it was turned down to fit a 3½” diameter copper tube.  It is still too tall, but will sort that when the curved flange to fit the boiler cladding has been made & the correct height established.  Originally, the thought had been to make a patern & cast it in one piece, but the thinking now is to fabricate it.  Next job is to make a former upon which to beat out the flange. 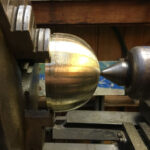 Meanwhile, a bit of polishing to the dome top.  Very theraputic.

I suppose if this doesn’t work out we could always sell it as an egg cup for an Ostrich egg!?