Prior to the development of the railways, different regions of the country kept their own local time, often different from Greenwich Mean Time.  Although GMT had been established as early as 1675 for astronomical and navigation purposes, there was little incentive for this to be adopted across the country.  However, in 1847 the railways decided that GMT would be adopted across the country and this raised the problem of how to synchronise clocks.  One solution was to refer to sundials but the problem was that the average sundial reads solar time, not civil or GMT.  Clearly different longitudes will read different solar times, but it is further complicated by what is known as the Equation of Time.  This results from the tilt of the Earths axis and the fact that the orbit of the Earth is slightly elliptical.  The net result is that the average sundial can be up to 16 minutes in error between solar time and civil time.  Someone wishing to check that their clock was correct by reference to a sundial had to refer to a table or graph to make the correction for the Equation of Time.  Also few sundials could be read accurately enough for this purpose, most being designed for decorative purposes rather than precision measurement. 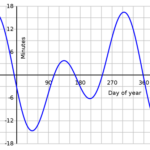 The Equation of Time has a complicated shape as shown on the graph.  When the line is above the axis the sundial will read in advance of civil time, and when below will read slow.  Some astronomical clocks displayed solar time as well as civil time, the mechanism usually involving a speciallyshaped cam.

Several sundials were designed that compensated for the Equation of Time, one of the most famous being George Gibbs of Preston.  Gibbs Heliochronometers are now very rare and command prices upwards of £5000.00

My design for a heliochronometer is partly based on the Gibbs instrument and the user does not need to refer to a table or graph of the Equation of Time to read civil time, accurately.  Time can be read to an accuracy of one minute.  It has the advantage that it eliminates the cam in the Gibbs instrument which is subject to wear leading to inaccuracy.  The instrument may be used anywhere in the northern hemisphere and adjusted to measure local civil time. 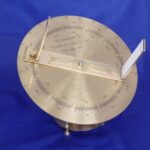 The instrument consists of a large disk surrounded by an outer bezel. The disk is engraved around the perimeter with the months and days of the year spaced in a linear fashion. The outer bezel has the months and days engraved but in a non-linear way, the spacing related by the equation of time.  It also has an outer scale calibrated in hours.  To read the time on a particular date the outer bezel is rotated to align the date on the inner and outer scales.  An arm pivoted at the centre, supports two posts, the front post (the index post) has a 1mm diameter hole through which the sun shines.  The rear post (the white screen post) has a white screen with a graticule line drawn down the centre.  The time is read by rotating the arm to cast the shadow and light spot on the white screen post graticule.  The minute scale on the end of the arm has graduations every 2 minutes and may be read by interpolation to 1 minute.  The time is then read against the minute and hour scales.  The Equation of Time correction is accurate to better than +/- 1 minute. 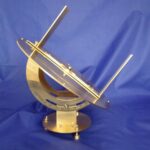 The dial, bezel & side frames were milled on my small CNC router, and the scales engraved using a 0.4mm slot mill.  The scales were then filled with black wax as used by clockmakers for clock dials.  The overall diameter is 300mm.  The brass plate is 1.5mm CZ120 plate and arm is constructed of 3mm thick brass strip, all the fittings are stainless steel.  The parts for the arm are silver soldered in a jig to keep everything square.

If anyone wants further details I can supply them and the digital files to create the dials.  Please email development@edinburgh-sme.org.uk