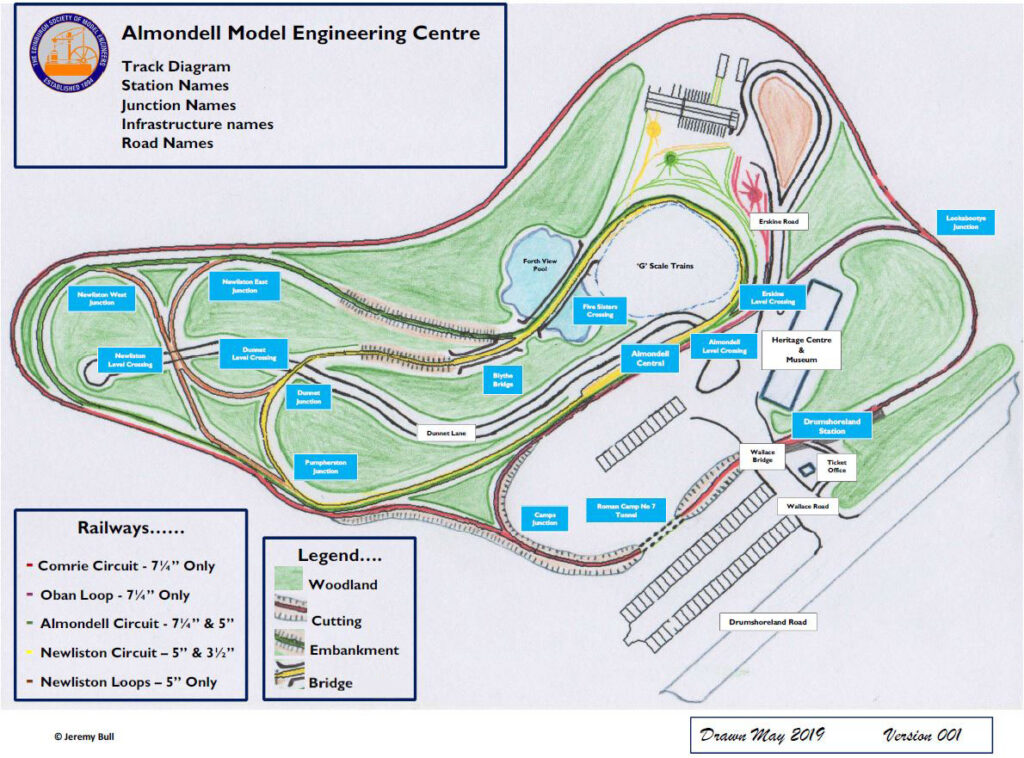 Good, appropriate names are ideal for:

Based on these criteria:  please refer to the plan above – click plan to enlarge

The three circuits currently labelled as A, B, C & D are given names relating to the origin of their track, thus

Circuit A is the Newliston circuit as it is mainly rail from Newliston.

Circuit B is the Almondell circuit as it is mainly new rail.

Circuit D is the Comrie circuit as it is all Comrie rail.  (This includes the loop through the station area too which is currently noted as part of circuit C)

The section between the two junctions connecting to the Comrie circuit is the Oban loop as it is mainly rail from Oban.

Drumshoreland Station.  Based on the former mainline station of that name, the site of which is on the road to the site from Broxburn.

Wallace Bridge & Wallace Road.  There are two memorials to William Wallace within very close range of our site.

Roman Camp No 7 Tunnel.  This was the former Shale Mine immediately next to our site and is very appropriate for a tunnel.

Camps Junction.  Camps Oil Works was to the South of the site and the North British Railway operated the Camps Branch which ran to the West of the site.

Pumpherston Junction.  A huge Oil Works to the West which Drumshoreland Road on its original alignment ran past.

Lookabootye Junction.  Named after an old farm close by and now the site of a 21st Century battery storage facility.

Almondell Central.  The name of our site and where all the tracks come together

Erskine Road & Erskine Level Crossing.  Named after the 11th Earl of Buchan, who lived at Kirkhill House in Broxburn was an early modeller. In 1776, he created a scale model of the solar system, and had considerable knowledge of mathematics, languages and literature and a great interest for astronomy.

Five Sisters Crossing.  The Five Sisters Bing is an iconic feature from the Shale oil industry & the bridge will have five supporting piers.

Forth View Pond.  You can see the top of the new Queensferry Crossing from here.

Blythe Bridge.  Named after the bridge at Newliston.