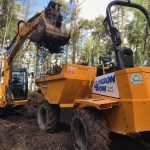 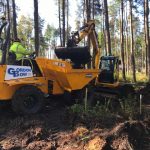 Thanks to the generosity of Gordon Bow, Plant Hire of Broxburn we had use of an 8 ton digger and 6 ton dumper for a long weekend.  We put it to good use on a number of tasks that were either impossible or difficult with the smaller machines.  Thanks Gordon! 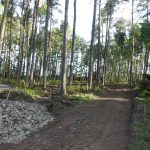 The first job was to tackle the area for the steaming lies, traverser, storage containers (future carriage sheds?) and adjacent roadway at the East end of the site.  This was cleared stumps and topsoil, the former moved to the stumpery along the front of the site while the latter was piled up ready for use wherever needed on the site.  The road will be built up with crushed concrete (6F2) so it will be able to withstand a substantial truck required to move the containers.  This will be appreciated by the car drivers when the steaming lies eventually come into use. 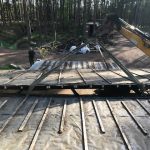 The second job was to prepare the two 20’ storage containers currently on site for their move onto the area prepared above.  This will allow work to start on the Heritage & Museum building now that the funds are in place for this.  However, before the containers can be moved the substantial roof we built over them needed to be removed so the opportunity was taken to use the digger as a Crane for this.  First, the timber roof was sawn into three large sections.  Then steel from the recently cut up old crane tower sections (Ex Comrie) were utilised to make an excellent lifting frame to which strops could be readily attached. 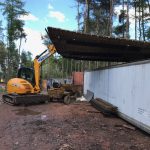 The timber roof now sits on top of the two 40’ containers pending moving to their final home.  The steel roof frame supporting the timber roof is still in place and will be removed just before the containers are moved.  Electrical wiring and plumbing will be disconnected at the same time. 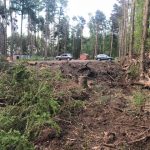 The third task (as everything had gone so well!) was to move the stumps that have gradually accumulated in the big car park to the stumpery.   The car park is now slightly bigger than it was! Further trees have been felled at the end of the car park to bring it to its final planned size once the stumps and logs are removed and some suitable hard base material spread.

The weather was very kind to us with the sun shining on dry ground.  This makes such a difference when working with machinery ‘off road’.  On the four days we spent doing this the team were on site from 09:00 to 18:00.  My thanks to all those who helped achieve this, it has been another great leap forward……. 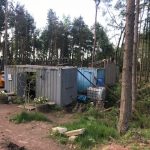 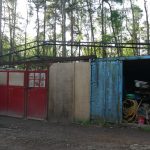 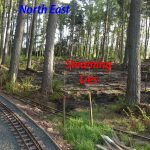 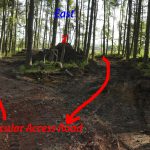 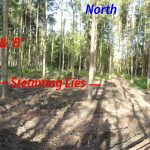 This final photograph is a panoramic view of the first task.

The ‘X’ in the preceding two pictures illustrates where the photographer was standing to take the shot.