Despite there being only one complete circuit (7¼”) and two more being two thirds finished (7¼” / 5″ & 5″ / 3½ “) thus offering an ‘out & back’ run, the track is none the less well used most Sundays.  For those of us running 5″ & 3½ ” locomotives we are counting the days to the early November delivery of the steel work for the Five Sisters Crossing and then it will be all hands to getting it erected & the track laid.

Meanwhile, enjoy the pictures from an earlier October run & the most recent Halloween steam up. 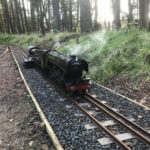 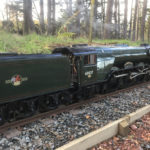 This is ‘Hyperion’ frustratingly at the current end of the line for the 7¼” / 5″ Almondell circuit. 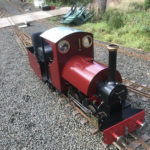 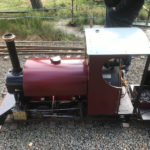 Meanwhile, Peter A. has his brand new locomotive out on the track for a run. 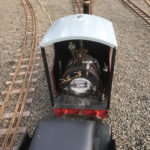 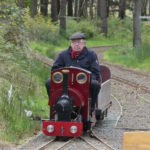 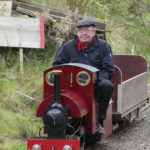 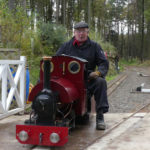 Steady as she goes!  The beaming smile says it all! 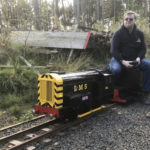 Later in the afternoon we were joined by Paul with his rather striking LMS shunter.  It makes a change from the usual BR class 08. 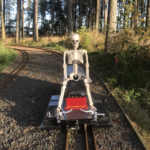 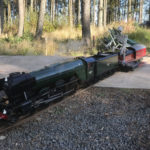 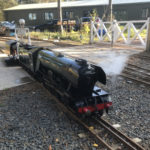 Due to roster problems the shed master could only rustle up a skeleton crew……. (groan!) 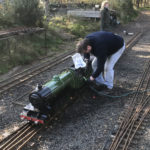 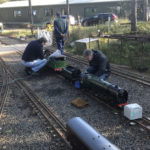 Paul is getting his 7¼” ‘Bantam Cock’ ready for some passenger hauling whilst Robert is connecting up his 5″ ‘Morning Star’. 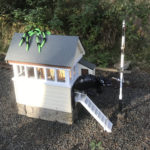 Goodness, look at the Ghouls that have taken over the signal box!  Hope the signalmans dog is okay.