With the easing of Covid restrictions this year’s meeting was held for the first time in the Heritage Centre & Museum building at Almondell.  Current Scottish Government rules & guidelines were followed.

There were two highlights of the meeting.

Member David Neale was given Honorary Membership for long service to the club.

David first visited the club in 1955 when it was based in a back garden in Edinburgh.  In the 1960’s the club moved to the former Eddleston Station where a larger track was built for 5” & 3½” gauges.  David officially joined in 1976.

In 1978 the club was forced to move again & it came nearer to Edinburgh, in the grounds of Newliston House.

Here the club remained until 2014 when a further move was required due to changing circumstances at Newliston House.  This time the club purchased the freehold of the 11 acre woodland site. 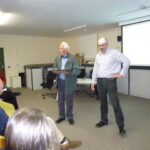 Over the years David has served on the committee, but since 2014 David has spent many, many hours in all weathers surveying the site & setting out the route & level pegs for the track, roads & building.

For David’s ongoing support for the club it was felt appropriate to recognise this with Honorary Membership.

President Mark Coupe is seen presenting the award to David.

Whilst this was going on Mark was unaware that a little subterfuge was taking place.

The second award of the evening, the John Russell Trophy for recognition of outstanding contribution to the Society was awarded to Mark Coupe for his work at Almondell over the last 8 years. 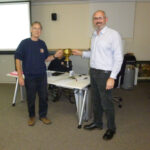 Mark has worked very long hours behind the scenes making the Heritage Centre & Museum a reality.  At times it has been highly stressful as Mark navigated his way through the myriad regulations for planning & building control, juggling material purchases ahead of price increases & dealing with contractors.  Then Lockdown struck to throw a huge spanner in the works.  At times it seemed like one step forward & two steps back! However, Mark stuck with it & finally in early 2021 the building was given the final seal of approval by the authorities.  The Trophy has been well earned.

The photograph shows the Secretary, Robert McLuckie presenting the award to Mark.