Fears that the demolition team would condemn the redundant and derelict Newliston signal box to be destroyed by controlled burning so that the valuable lever frame could be recovered for use elsewhere proved unfounded.  After a last minute rescue bid was launched by Robert, transport of the structure was arranged and with careful handling it was spirited away for future use.

Like most disused structures it had suffered at the hands of the locals.  Every window had been shot out by erstwhile air rifle users, some unwanted squatters had left the remnants of their ‘bike’ in the eaves and unsurprisingly the roof had some sections of covering missing which had let the water in.

Undeterred, Robert set to work.  The first sign of something afoot was the appearance of a level brick base to the West of the recently poured crossing.  Then with much lifting, adjusting & pondering with a spirit level in the sweltering heat (32.5°C!) the restored signal box was revealed.  In the bright Sunshine and under a clear blue sky the structure looked magnificent. 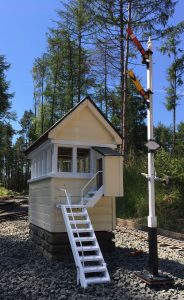 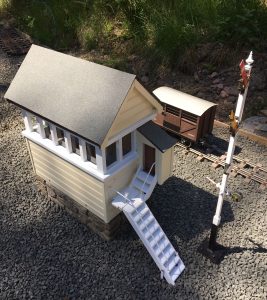 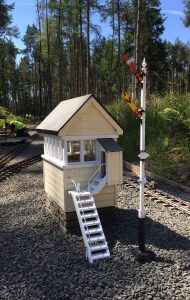 Even the signalman’s dog looked pleased with the result…… 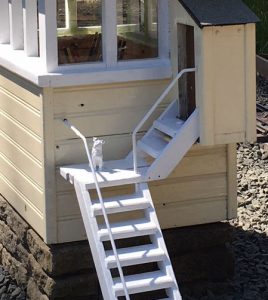