ESME has been successful in winning a grant of £8,838 from the National Lottery Awards for All, Scotland, to run a “Working on the Railways” Programme which will be delivered for us by Concrete Scotland. This follows a successful trial programme run in 2017 by Octavian Concrete, contributing to their “Innovation in Training Award 2017”. ESME member, Dale Lyon, MD of Concrete Scotland will be coordinating the activities, which will use the Almondell Model Engineering Centre (AMEC) 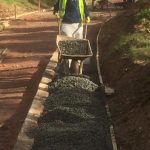 The expanded initiative is looking to host 8 one day events for between 10 – 20 participants who will be tasked with constructing a section of railtrack of between 20 – 50 metres.  At the end of the session each will receive a certificate recognising their endeavours. 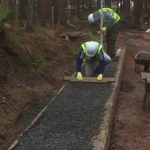 The participants will be nominated from local schools, youth and community groups and local businesses who may wish to use the programme as a team building activity. 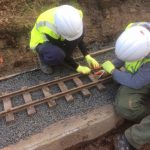 The benefits offered by this joint initiative is to engage with local groups by introducing them to a facility that they can either join as members or once the facility is completed, return as visitors.  Joining ESME as a result of participating may not be as far fetched as it sounds.  We have had one participant from the pilot already join!

One pupil from Inverkeithing commented that ‘it’s the best day in school, not in school, that I have ever had!’  As part of the plan is to operate Almondell as a local community facility, there is no better way than having them involved in the development of the site.