‘Hyperion’ underwent her four yearly hydraulic test which, I am pleased to report, she passed.  However, the wet header gasket required replacement which meant the removal of the chimney, kylchaps, smokebox door & ring, main steam pipes & superheaters.  Seeing her on track after the test she looked rather forlorn and sorry for herself, particularly as we had just had a shower of rain.

It reminded me of the photographs from the 1960’s when these magnificent machines went for scrap, often with bits taken off either to keep a class mate running or the chimney for a flower pot in someones garden.  It so happened that Robert had his class 27 out and so the opportunity was taken to recreate the melancholy journey to the scrap yard….. 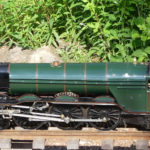 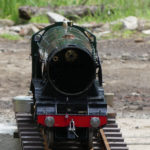 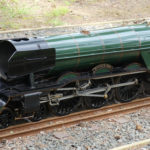 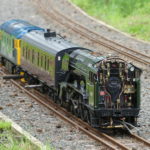 Click here to watch the video of her journey.

‘Hyperion’ herself was withdrawn on 12th December 1963 from St. Margarets, stored at Bathgate before being sold to Arnott Young, Carmylie in June 1964.