It has always been my wish to construct a garden railway. When I retired the plans started to come together.  However, along with retirement came a house move.

The house we lived in for the previous 33 years had a garden that was nearly flat, and occupied mainly be lawn. In effect a blank canvas into which it should have been easy to fit a railway. In reality I struggled to convince myself of the best plan for the space.

The house we moved to was different in almost every respect to its predecessor, not least in the outside space. From flat and lawned we moved to mainly shrubs on a gradient of nearly 1 in 4. With the need for gradients on the line that would not outface small steam locomotives we would be limited, more or less, to running along the natural contours.  By careful planning, and digging of several trial excavations into a rather rocky hillside it turned out to be feasible to include a return loop using the second radius curves and points produced by Peco for SM32 scale. This required the building of a wall on the downhill side of the loop, and a significant cutting into the hillside.  Construction started just before Covid-19 hit the country. 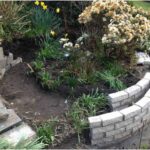 Having completed the wall along its highest point I hit a problem. During the first phase of lockdown it became impossible to replenish my supplies of walling blocks, cement, sand etc. Construction continued, but the wall became some log roll thoughtfully left by the previous owners of the house. 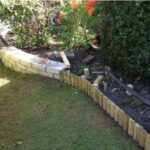 Thus, by the end of August the first phase was complete as far as a temporary version of the terminal station and running could commence. 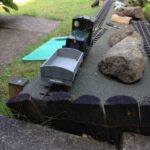 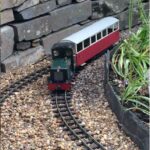 The second part of phase one is now underway to move a section of path, thereby allowing the permanent version of the terminal station to be built.  As we are now in another form of lockdown I can foresee the supply of building materials becoming an issue again.  Having a much larger garage would have helped.  Mine is already is full enough without stocking up on wall blocks, cement etc.

Best wishes to everyone.