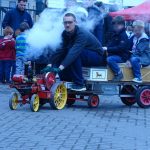 The weekend of the 7th & 8th of April saw Jeremy out and about with his 2″ scale model of a Fowler ‘Lion’ Showman’s Engine.  Built to a 1972 design by Plastow’s, the model is a compound, three speed, four shaft engine.

Working at 90 psi (rated to 110 psi, but not needed) the model is a powerful performer.  It was in steam for 6 hours without a break on both days pulling kids and adults.

Yes, it doesn’t have the Showman’s canopy, but Jeremy considers this would make it impossible to drive plus it would hide the motion work which is the most fascinating part to the general public. 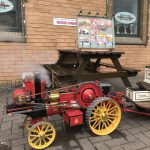 During a well earned lunch break the dynamo was coupled up to run the lights on a billboard display.  The dynamo was made originally as a DC motor.  It produces 25 volts DC and the 10 x 24 volt filament light bulbs draw 0.5 amps.  The plaque on the front of the dynamo is a replica of a genuine Showman’s engine Dynamo which state ‘110 volts, 35 amps’.  Jeremy wishes he had £1.00 for every time he is asked ‘Is that not dangerous?’

The billboard is based on a typical advertising hoarding and the posters are reproductions of the time. 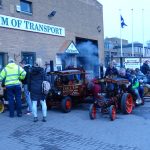 The show was well attended by the public who enjoyed riding behind the two model Foden steam waggons and the the Burrell single cylinder tractor. 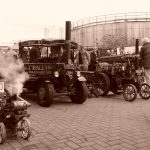 The steam weekend was originally started by SMET member Ron, who has his 5″ gauge ‘Sweet Pea’ running on a portable track plus his extensive display of models set out inside the Museum.

For further details of events at the Dundee Musem of Transport visit their website.