The other Sunday at Almondell Trevor & his son arrived to test their new 7¼” power bogie.  It didn’t take long for the curious among us to have them both cross examined as to the where & wherefores of the project!

Here, in Trevor’s own words is the full SP: ‘The loco when finished will be based on a class 40 however it is not intended to be a scale replica! 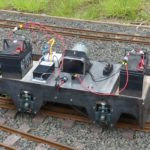 The chassis and all of the metalwork are of my own design along with the drive train.

The electronic controller, hand throttle and relay board for lights and horns etc. were supplied by 4QD. The motor is a 1hp, 750w Movimotor unit.  When its finished it will be powered by two 110Ah leisure batteries, the batteries fitted here were only for testing purposes. 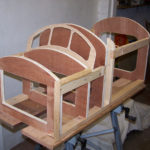 The picture of the body shows the basic concept although this is still work in progress.

The whole idea of the project was to see what we could build ourselves from scratch on a more modest budget than the kits that cost several thousands of pounds.’ 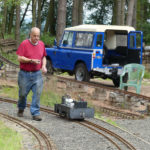 Trevor is seen jogging beside the power bogie on its first full speed test run.  It will fit into the back of his Landrover for ease of transportation.  Gearing is such that it will provide a good haulage capacity without being a ‘racer’ on the track.

It wasn’t taken for a very long run as none of the chains had been greased or other moving parts oiled, just in case it had to be taken to pieces for modification following the test run.  However, that excuse didn’t last long as George produced a driving truck and once coupled up let them have a run behind it. 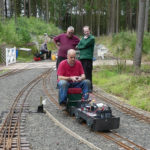 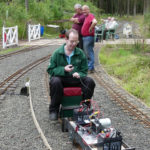 The grins say it all!