It was a damp and misty start to the day, but our intrepid Roving Reporter Robert was there and filed this report with the News Desk……

Another success story at Almondell and today we received the very first visiting locomotives from other clubs.  The honour of being the first ever visiting loco to steam around Almondell went to Gordon Roberts, all the way from Somerset with his beautiful Darjeeling Himalayan loco, which was a monster in size but performed perfectly around the Circuit ‘C’ track. 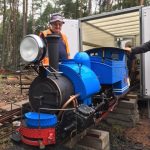 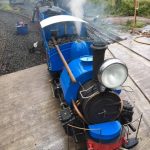 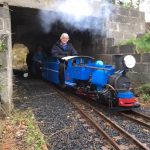 From Yorkshire we had Phil and Jacquie Owen who run Blackgates Engineering and Phil was driving a lovely example of a Sweet William named “Jacquie O”. 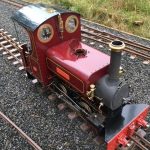 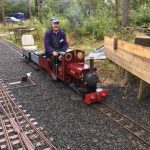 All owners commented on the quality of the track.  The Circuit ‘C’ has some ex Comrie Rail Road track on a good third of the circuit and we were pleased to welcome Bob Smith to the site on Sunday.  Bob had generously donated the rail.  Whilst on site Bob took the opportunity to have a run around the track and was pleased to see it in use once again. 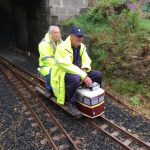 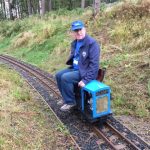 All the visitors were very impressed with everything. A few guided tours across the site and they are looking forward to visiting again to run on more track.

We had quite a few people just spectating as they had called in on their way south from the AGM at SMET (Perth).  Most arrived just after 1030 am and departed just after 3 pm.  Just as the two ESME members were locking up another car and trailer arrived. 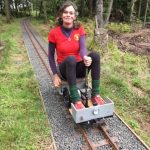 A model engineer all the way from the Netherlands, called Rosie Bongers, who had a most interesting hand powered track vehicle.

A great day at Almondell and everyone thoroughly enjoyed the experience, the site and the hospitality.
Gates finally locked just before 5pm.
We use cookies on our website to give you the most relevant experience by remembering your preferences and repeat visits. By clicking “Accept”, you consent to the use of ALL the cookies.
Cookie settingsACCEPTREJECT
Read More
Privacy & Cookies Policy