“As part of our End Polio Now Campaign several members of the Rotary Club of Livingston met up with members, families and friends of The Edinburgh Society of Model Engineers (ESME) to plant 5,000 crocuses at ESME’s new home in Almondell near Pumpherston.

The Rotary Club of Livingston has been extremely keen to support ESME’s project as its members are turning an untamed, wild forest into a wonderland of trains in a beautiful area of mixed woodland providing habitats for flora and fauna. There is still much work to be done but this promises to be an exciting future prospect for Livingston and its communities.

A very special thanks to ESME as their surplus wood has been re-cycled for The Rudolph Project 2017.

ESME’s proposed Heritage Building will be a venue of learning and a place of social activity which will give pleasure to many of all ages.”  Lizette Bingham

Peter Arnold attended their recent dinner where the results of the The Rudolph Project 2017 were announced and a substantial cheque was handed over to various local charities.  Peter: “We are delighted that ESME was able to contribute by providing recycled wood from our activities at Almondell.  We look forward to continuing to contribute to this and other projects in the future.”

The Rotary Club of Livingstone look upon our work together as a joint environmental venture to enhance the local environment and, of course, the Rudolph’s, owls and snowmen are made from re-cycled wood and fabrics. 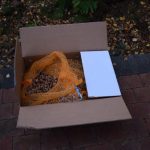 “Tis time to plant them now,” he said,
“If they shall bloom in Spring”;
“But every bulb,” said I, “seems dead,
And such an ugly thing.” 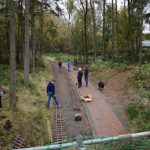 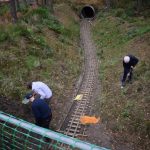 Saturday, 28th October dawned cloudy, but dry for the bulb planting sponsored by the Livingston Rotary Club.  A good contingent of Rotarion’s turned up to to plant the contents of a huge box of bulbs in the station area and the cutting between the two tunnels.  At one point the car park looked decidedly full.

Our thanks go Livingston Rotary Club and to all those who turned out to help.  We look forward to seeing their efforts rewarded by a colourful display in the spring.

The efforts of the Livingston Rotary Club planting hundreds of Crocus bulbs to brighten the site in Springtime has been well rewarded as our Roving Reporter discovered when they were at Almondell enjoying the Spring sunshine and warm temperatures after the ‘Beast from the East’ had retreated.  Grabbing the trusted camera, these pictures say it all.

Crocuses are never ones to shy away from the sunshine…… 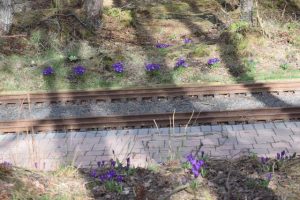 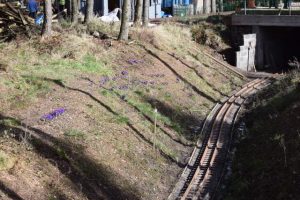 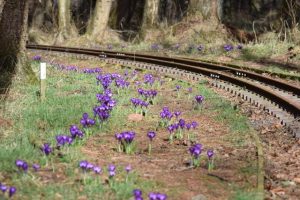 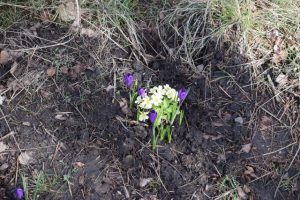