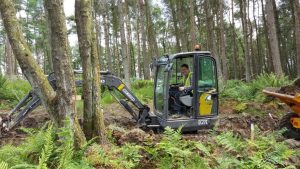 An excavator and dumper were hired for ‘digger week’ to allow a number of critical tasks to be progressed.  A good number of volunteers helped out with an average of about five or six each day. 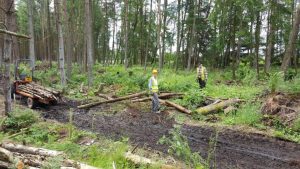 Many stepped up to unfamiliar roles like ‘dumper driver’ which can get decidedly rock and roll at times.  At the end of a tiring week it can be hard to remember everything accomplished but I’ll try. Sorry if I forgot your favourite bit. 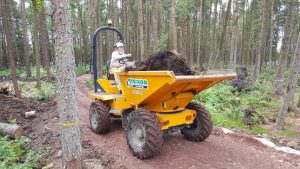 On Monday we dug foundations for the buttress walls on the west end of the road bridge and an adjacent access ramp allowing machinery down into the cutting between the tunnels. 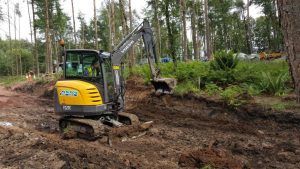 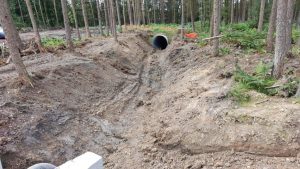 Some blaes was transported to some locations where tracks had become a bit boggy due to previous machinery movements. 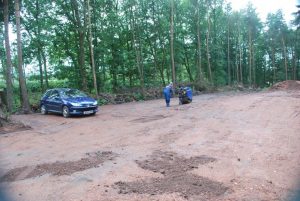 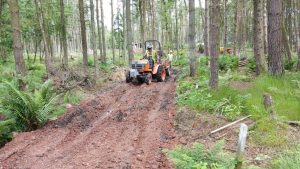 An early start on Tuesday saw the pouring of concrete for the top half of the eastern buttress walls and then the west foundations.
With this complete we worked on surfacing the western access road (parallel to track sections A1,B1,C1) with teram and blaes followed by rolling. Some work was done digging drainage channels in the wet area between.

The road was extended about 60 metres on Wednesday so it now reaches the far side of the planned inner track loop. This involved removing a dozen or so tree stumps, using the digger to roughly level the base, laying teram and blaes, followed by the usual raking and rolling.  A slight hiccup with the roller meant we didn’t quite see this completed until the following day.

On Thursday, after fixing the roller and completing the western access road, we widened the excavation for the track base A1,B1,C1 and sloped the sides to help stabilise the excavations. 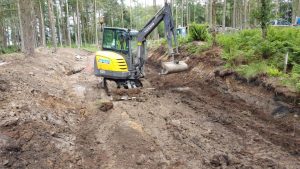 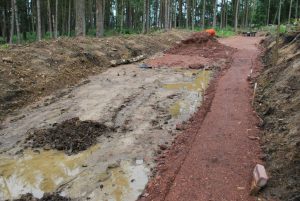 A little back-tracking on Friday saw us retrieving dumped topsoil to replenish the pile of topsoil ready for filling behind the track edging boards.  This was followed by the improvement of the access between the new western access road and the A1,B1,C1 track bed. This has long been a problematic area for machinery as it is a very wet area.  Much sloppy material was removed and replaced with blaes.  Combined with drainage work this area should remain more accessible from here on.

On Saturday a bigger team was able to parallel task.  The shuttering was removed at the road bridge to unveil the completed eastern buttress walls and western foundations. 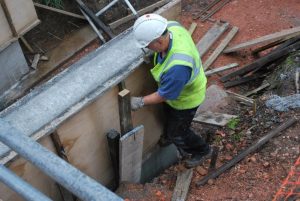 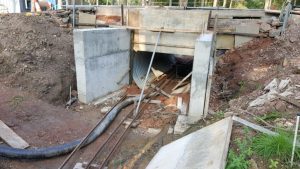 Meanwhile the A1,B1,C1 track bed received further tuning to the levels but this was suspended for some surveying and adding of more altitude markers to confirm where we are aiming for.
Several trailer loads of logs were removed from the big car park while the front part of this was being leveled ready for imminent use.  With the piles of logs growing in the original car park it is becoming increasingly more important to get the big car park operational. 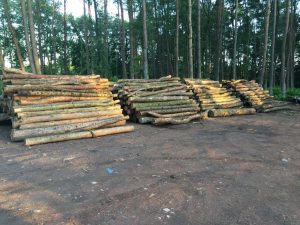 Overall it proved to be a very satisfying week with significant progress which should enable other more manual tasks to proceed in the coming weeks. Thanks to all who supported the effort as usual.