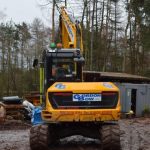 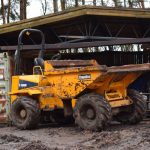 On Friday 3rd February an 8 tonne digger and a 6 tonne dumper were delivered to Almondell by local company Gordon Bow Plant Hire.  We are grateful for their support.  These are the largest machines we have yet used on site which was just as well given the volume of material we had to move from the remaining cutting beyond the tunnel.

Saturday started with a low area of the site being prepared for the spoil we were expecting to produce.  The digging of the cutting was then commenced with the big dumper running back and forth to the spoil heap. 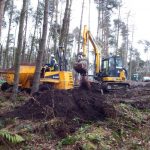 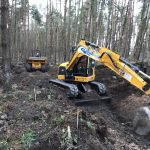 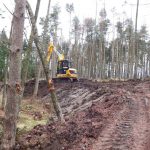 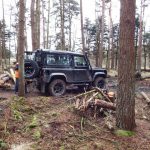 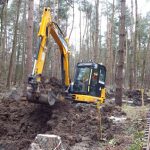 On Sunday, with a smaller team, the digging of the cutting continued along with some further tidying of brush.

On Monday, the pattern of work was starting to look repetitive with yet more digging of the cutting.  Will it never end?… 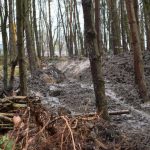 On Tuesday, the pattern would have been repeated except that some heavy overnight rain with on-going sleet and snow during the day made things very challenging and progress was much slower. 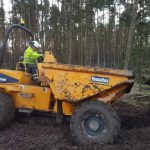 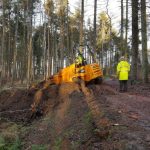 The big dumper was making deep ruts in the access roads until it would lose traction due to grounding.

Where the access road was above the level of the surrounding ground those same ruts would break out of the road edge with the dumper slipping sideways into deep holes it formed as it slid.  After a number of recovery operations we concluded that further progress was impossible unless we re-built the road. Over 20 tonnes of blaes disappeared into the road but this allowed the real task to continue. 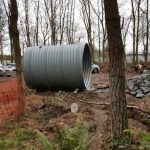 Later in the day, one of our members, who had picked up the large pipe (2.2mtr in diameter) from down south, dropped this off at the site, to be added at some point to the existing tunnel.

After a day floundering in cold wet mud a long hot shower was very welcome.

A welcome day off on Wednesday allowed things to dry out a little. 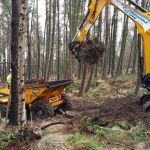 On Thursday work started on removing some stumps on other track routes.  This is another task for which the big excavator was ideally suited.  It is a struggle with smaller machines and takes much longer. 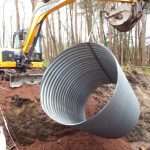 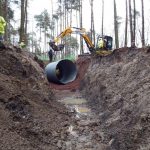 The large pipe (a 2.8 metre off-cut) which was to form an extension to the tunnel was then lowered into place on a bed of blaes which had been prepared while the stump removal was going on.

The rest of the day was filled with … yet more digging of the cutting!  We finally broke through the end of the cutting and formed the approach area for the two tracks which are to enter it. 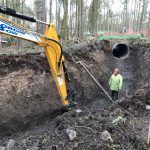 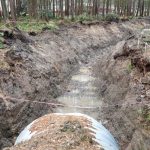 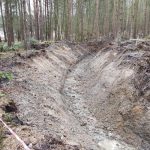 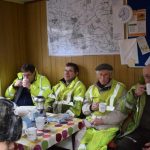 First thing on Friday we managed to repair the door lock on the cabin which had become very stiff.  Surprisingly this was achieved using the 8 tonne excavator and a team of four.  The trick was the lift one side of the cabin slightly allowing some concrete blocks to be placed underneath.  This restored it closer to level and untwisted the cabin enough for the door lock to align correctly.  Another bonus is being able to get more tea in your mug now that it sits more level.

The rest of Friday was taken up with lots of stump removal so that there are now many track routes ready for preparation using smaller machinery.

Saturday turned out very wet again but a good sized team turned out anyway.  The excavator was used to push over a few trees in the way of access to the top of one side of the cutting.  While these trees were cut up and removed toward the log pile, the excavator finished the cutting side and placed the spoil over the tunnel extension so that the pipe is now securely in position. 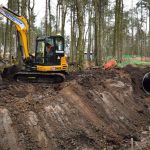 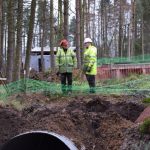 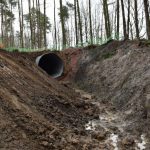 With this complete the team then moved on to construct a drain across one of the track beds and the access road.  This part of the site has tended to be very wet and boggy, especially this week!  With a new pipe in place under gravel it should be a bit drier in future. 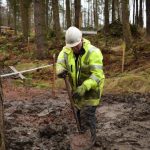 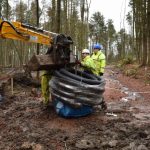 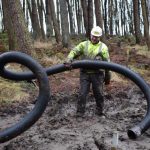 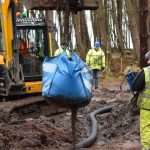 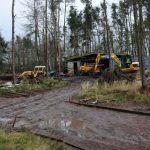 Finally, more than a dumper load of mud was scraped off of the road surfaces adjacent to the containers and cabin.

A lot was accomplished in the week thanks to the many volunteers and the use of the machinery courtesy of Gordon Bow Plant Hire.  With the cutting now fully excavated the way ahead for completing the first loop of track is now much clearer.